The Daydreamer Detective Returns A Favor

Mei has a favor to return…

And it leads to the mystery of a long-gone runaway!

Mei can never catch a break from mysteries!

With her tea shop now open and living her dream life married to Yasahiro Suga, she's just trying to avoid bad luck and live a normal life. But when a friend shows up asking for help with an old missing person's case, Mei can’t resist the pull of a mystery unsolved. She knew the young woman who went missing and had always wondered what happened to her. Now's her chance to find out, even if it turns long-time Chikata residents against her.

While Mei is working at the tea shop and helping with the case, she's also assisting her mom on the family farm. Convincing her mom to renovate the old house is not an easy task, and Mei is continually frustrated by her mom's lack of enthusiasm for the project. Until Mei's brother shows up and wants to buy the business out from under her, betraying Mei and Yasahiro in the process.

Can Mei find the missing woman and keep her reputation intact? And will she and Yasahiro repair their relationship with Mei's mom before it tears their family apart?

With her head in the clouds and a taste for solving crime, you don’t want to miss Mei in The Daydreamer Detective Returns A Favor, the surprisingly rich fourth course to the Miso Cozy series of cozy mystery novels. 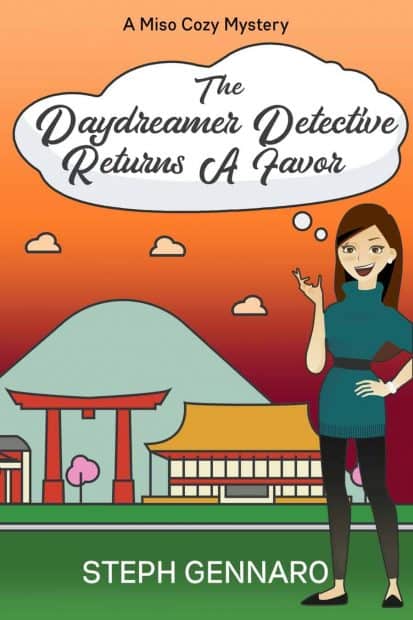 “So what’s on your mind? What do you need my help with?” I expected her answer to have to do with an elderly parent or aunt or something of that nature. If there was anything I was known for now, it was taking care of the older set, and I was proud of my achievements. I loved my mom, despite our fight earlier in the year, and I loved the family farm, too. I would do anything for her. But I didn’t want to be known as a farmer. That wasn’t my destiny. This was.

“It’s complicated. Did you know I’m only about five years older than you, and that my family goes back in this town for several generations?” She dried a teacup, being careful to wipe the porcelain down thoroughly before setting it on the shelf next to the others.

“No. I went to high school in Kawagoe, but my best friend at the time went to your high school. Maybe you remember her? Ria Fukuda?”

I fumbled and dropped the teacup I was washing and blew out a relieved breath that it was undamaged. “Do I remember her? I think the whole town remembers her.”

Ria Fukuda was Chikata’s biggest mystery. Forget the deaths of Akiko’s father or Etsuko or Amanda. The disappearance of Ria plagued our town for many years. One day, she had been laughing and playing with her friends at a town festival. The next morning she was gone. No note. No indication that she was unhappy and had run away. Nothing. The search went on for weeks, and her parents pleaded with town residents endlessly for help. They never gave up on her, even when all her friends had moved on to college and their adult lives. Even when their younger sisters and brothers had done the same.

“She was my best friend from birth. We were inseparable until senior high school when we went different ways.” Akai’s eyes were unfocused and distant, her memories diving back to over a decade ago. “After her mother died, I started visiting two, sometimes three, days a week with her father. You know, helping him with everyday stuff like this.” She lifted her dry teacup and placed it on the shelf. “He never recovered from her disappearance, always waiting at the window, looking outside, hopeful she would return. It broke my heart, but there was nothing I could do for him besides making his home life more comfortable.”

“That’s so sad. I remember her being such a fun girl.” I soaped up another dish as I traveled back in time, to the fields behind Akiko’s house, where we played with her brother, Tama, and his friends, including Ria. Akiko and I had both looked up to her. Ria was pretty and smart, and she had both male and female friends. Her personality was open and welcoming, which was why so many people were affected by her disappearance. “But I haven’t thought about her in years. I always figured she had run away.”

“Yeah, everyone suspected the same. But I knew her well enough to believe differently. She loved her parents, and she wanted to make them proud. She was excited to go to college. Wanted to be a teacher.” Akai chuckled, shaking her head. “She loved kids.”

I smiled as I remembered how Ria had always spent time with us even though the older kids found the little kids annoying.

“Anyway, her father got lung cancer a few years ago. He’d picked up chain-smoking after Ria went missing, and it burned him from the inside out.” Akai grimaced, her lip curled in an angry S. “Ria had no brothers or sisters, and her parents had no family left, so her dad left everything to me in his will.”

I raised my eyebrows at her as I washed the last teacup.

Akai sighed, her shoulders dropping. “It’s not as great as you think. The man was a hoarder, and now I have a fire hazard of a house on my hands, and contracts for network security work are piling up on my desk. I want to get the place cleaned out and on the market before the end of the year, but I don’t think I can do it myself.” Her voice quavered, and my heart constricted. Akai wasn’t one to show emotion, and here she was talking to me about them.

“This was another awesome read in this unique cozy mystery set in Japan! This might be my favorite book in the series yet. The mystery was really well done, the missing person case Mei took on was very interesting and I couldn't wait to find out what had happened to her. And the twist at the end was great and totally not what I had expected. This series has a lot of continuity, so I would recommend reading it in order if possible. There are some great side plot lines going on as well and I liked seeing more Yasahiro and Mei in this book. They are great together and I liked how Yasahiro acted in this book, always picking Mei's side. If you love a good mystery you don't want to miss this series!” – Lola, Lola's Reviews

“I have enjoyed this series a lot as Mei develops into a more responsible and loving adult, continuing to work on her family's farm while also running her tea shop and solving another mystery, that of a missing girl whose best friend from high school asks Mei to find… Other drama includes tense relations with her mother and a huge typhoon which bc causes major damage. I like being able to learn about Japanese culture as well. Great read!” – Donna Mitchell, Goodreads

“Ichiban! Ichiban means number one in Japanese. This mystery series is a true adventure. I am left hanging on the who done it and have yet to figure out the villain. Having lived in Japan for three years as a military nurse in the 1970's puts me at cultural advantage, but a mystery is a mystery!” – Karen Gibbons, Goodreads

“I love this series! Since reading the first book, I have felt I was coming home. Each successive book in the series enhances that feeling. Mei is once again drawn into a criminal investigation, only this time it’s a cold case. As she gets closer to the truth she endangers herself and her baby. I have always been angry with the way Mei’s mother treats her and happy that her husband and friends are there to buoy her up when she needs it. This time, finally Mei’s mother gets it and seems to come around. Well written with an authentic look at another culture.” – Anne G Kasaba, Goodreads

“How much do I love this series? So much! Do you have certain books that just feel like curling up next to a warm fire on a winter day? That's what these books feel like for me. I love them! I love Mei and her penchant for investigation, her chef boyfriend and his delicious sounding food, and all of the fun characters of their little farming community in Japan.” – Carysa Locke, Author