Until Yasahiro's ex-fiancée is murdered!

Mei Yamagawa’s bad luck is almost at an end…

Her tea shop is a week away from opening, she and Yasahiro have planned a trip away, and the future is looking bright and hopeful. But when Yasahiro’s ex-fiancée, Amanda, shows up unexpectedly, demanding his time and presence, all of their plans dissolve. Amanda is tough and drives Mei up the wall, so it’s no surprise when Mei tells her to get lost, only for Amanda to be murdered a few hours later. Yasahiro becomes the prime suspect, and Mei must put everything on hold to help free him.

Following Amanda’s past through her digital footprint, Mei uncovers secret lovers, shady business deals, and the biggest secret of all, why Amanda and Yasahiro broke up in the first place. With everyone turning against her and the case under media scrutiny, tracking down the killer becomes an obsession Mei can’t give up. There’s no turning back, though, because solving the murder means getting her life back. Not solving it means losing everything forever.

With her head in the clouds and a taste for solving crime, you don’t want to miss Mei in The Daydreamer Detective Opens A Tea Shop, the hearty third course to the Miso Cozy series of cozy mystery novels. 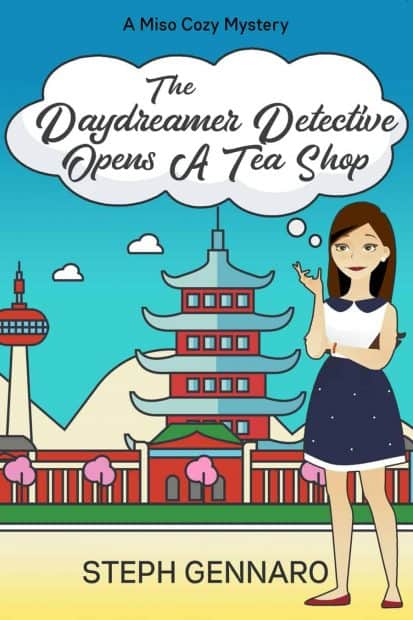 The shovel sliced into the earth with a solid crunch, and everyone broke into applause. As the president of Midori Sankaku lifted the spade full of dirt to the cameras, he laughed, excited to be at this stage. It had been three years in the making, but the groundbreaking ceremony for the new greenhouse was finally taking place, and soon, many more new people, businesses, and traffic would grace our small town with their presence.

I smiled and clapped with everyone, a burst of pride for my tiny community lifting my chin. Chikata had gone from dilapidated and dying five years ago to renewed and prosperous. People in the surrounding towns and prefectures were sitting up and taking notice. It had been a long time since a farming community in Japan had turned itself around, and we were leading the way for other communities to accomplish the same goals.

“Thank goodness this is really happening. I thought I’d never see the day,” Mom whispered, continuing to clap and smile at the surrounding people.

“Indeed.” There were several times in the past year I was as good as dead, so being at the groundbreaking ceremony meant a lot to me.

Everyone was here today except my good friend and neighbor, Akiko. Mom’s friend, Chiyo, stood next to us with her son, Goro and his wife, Kumi. Goro was also accompanied by his partner, Kayo, and other members of the Chikata police force. We all exchanged happy smiles as the applause died out.

I turned to Yasahiro, my boyfriend, the head chef and owner of Sawayaka, our famous slow food Japanese restaurant in town, and threaded my arm through his, squeezing and resting my head on his shoulder. For once, the weather was calm, and the sun shone upon us, even if it wasn’t warm yet. Spring had come to Japan. The cherry trees around town had bloomed a month ago in April and now held small green leaves on their branches. Today, we’d be content with sunny skies and a light, cool breeze.

Yasahiro lifted his chin and smiled, but he kept his attention on the podium as another Midori Sankaku representative spoke of the opportunities their business would bring to Chikata. It was a good speech, and I held a lot more faith in Midori Sankaku than I did a few months ago when they arrested Fujita Takahara for killing Etsuko. In my mind and in my heart, I needed to separate the two. It was horrifying what Takahara had done, but his actions had nothing to do with Midori Sankaku.

We clapped again as the speeches concluded, and everyone dispersed to walk the twenty minutes to the park at City Hall. We walked beside Kumi, her hand on her hip and a grimace on her face. She was in her second trimester of pregnancy and already experiencing the aches and pains of carrying a baby. Her belly had rounded and so had her cheeks, but she loved being pregnant because she wasn’t too sick, just in pain.

“Shall I go get our car?” Goro asked, squeezing Kumi to his side and helping her.

She shook her head and let out a long breath. “No, I’ll be all right. The doctor says I should get more exercise. I might have fewer aches and pains if I loosened up a little.”

“That book we read said your joints will loosen up on their own.” Goro, always the student, had been reading all the pregnancy and baby books he could get his hands on. Whenever I visited him at his desk at the police precinct, he was poring over another book, marking pages with post-it notes and highlighters.

“I still think it’s better for me to be walking.” She patted his arm. “Don’t worry about it.”

When we reached the park, we set out a blanket and sat in the sun. Mom and Chiyo popped open their picnic baskets and handed out drinks and rice balls to everyone.

“Now I suppose I’ll be hearing a lot of construction in the next couple of months,” Mom said taking a bite of her rice ball and staring off toward home. The new greenhouse when completed would be on the cleared land closer to town. Administration buildings for Midori Sankaku would be located on Akiko’s back farmland.

In January, Akiko sold her farmland but not the house. As a full-time nurse, she didn’t have time to tend the fields anyway, but it would take many months for the details to work out. The administration buildings wouldn’t be built for another two years.

“At least we have the pine trees to block the noise. I’m sure Akiko will hear most of it.”

“Where is she again?” Mom asked, pulling more boxes of food from her picnic basket.

“She’s at a conference all week in Kobe.”

I took a moment between bites to stretch out my arms. Mom and I had spent the morning in the fields, turning the soil, adding compost, and preparing for a second planting. I lived at home during the week, working most mornings outside, and then spending my afternoons in town getting my new tea shop ready for opening in two weeks. My body ached in places I didn’t know existed.

“Did you hear from my contact in Kumamoto?” Goro asked Yasahiro, passing him a pair of chopsticks and a bento box. Usually it was Yasahiro handing out the food, so it was nice to see him get a break for the day.

“Yeah. Mei-chan and I are set to go this weekend. We know where we’ll camp, and we’ll be helping people recover lost items from their houses for the week.”

Chiyo brought her hands to prayer position. “I’ll be waiting by the phone every day to hear from your mother on how you’re doing.”

“We’ll be fine,” I reassured her. “There haven’t been aftershocks there recently. We’ll be extra careful.”

Yasahiro and I were both struck by the hardship of everyone in Kumamoto during the earthquake in April, so we decided to volunteer with relief efforts once we aligned our schedules. Though it wasn’t the best time to drop everything and go (I still had plenty to do to get the tea shop up and running), it was better for us to volunteer before the tea shop was open for business. I would be the tea shop’s only employee for the first year, so vacation time would be minimal.

“I felt it was my duty to go, to help in some way. I’ve been very fortunate.” When Yasahiro spoke this way, my heart grew three sizes. It was something I loved about him. He knew how good he had it, but he never took that for granted.

“Me too.” I squeezed his knee, but he laughed. Probably because he wanted to argue with me again about how I needed to be more self-ish not self-less. But he knew that wasn’t me. I’d always put his or other people’s needs in front of my own.

“We leave on Sunday, and we’ll be there through Friday.”

“Back in time to finish a few things and open Oshabe-cha.”

“This was such a good read! I love Pajonas's writing style and enjoyed every second of reading this book. The mystery was a good one. I liked how we got to meet Amanda before she was killed as that gave me a better feel for her as a person. I had four suspects for a long time, but wasn't quite sure who was the murderer and how everything fit together… I can't wait to read the next book and see how things play out there! This is one of the best books I read so far this year!” – Lola's Reviews

“This installment really puts Mei’s investigative skills to the test, and the stakes are way higher because her relationship with Yasahiro is on the line—he’s the prime suspect! I loved the fact that, even though Mei was faced with her worst relationship nightmare—Amanda coming back into town and trying to lay claim to her man—she didn’t give up or give in.” – Nicole Hewitt, Feed Your Fiction Addiction

“I Love Japan. I envy Ms Pajonas. She was in Japan in 2016 and I left there in 1974 (An Army Nurse there for three years). I also left a piece of my heart in the land of the Rising Sun. I could see myself so much in Mei and enjoyed seeing her mature with each book. I also love a good mystery (ie, Agatha Christie novels). To have all this rolled into one book is awesome. The author describes the setting so well that I can smell the miso soup, see the restaurants and stores, take off my shoes and sit on the floor. Looking forward to the next novel. What will the future bring to this couple.” – Karen Gibbons, Goodreads

“This third book is a little faster paced than the previous ones. While it still has a little humor, and a good bit of suspense, it is also the most emotional roller coaster ride of any in the series.” – Thomas, Goodreads

“When her boyfriend's ex comes to town, Mei knows the woman is there to make trouble. Trouble with a capital T. Worse, she turns up dead. Mei has to solve the murder to save her boyfriend. The author puts Mei through the wringer in this book. I've enjoyed all the Daydreamer Detective books. In this one, the stakes are the highest. Mei has to fight for her love, when all he does is push her away–his way of sparing her. Her anguish is palpable, and her heartbreak crushing. The satisfying ending is such a relief.” – Diane Burton, Author